A collection of mechanical keyboards that I have at my disposal, including information on all the accessories like keycaps, switches and cables. 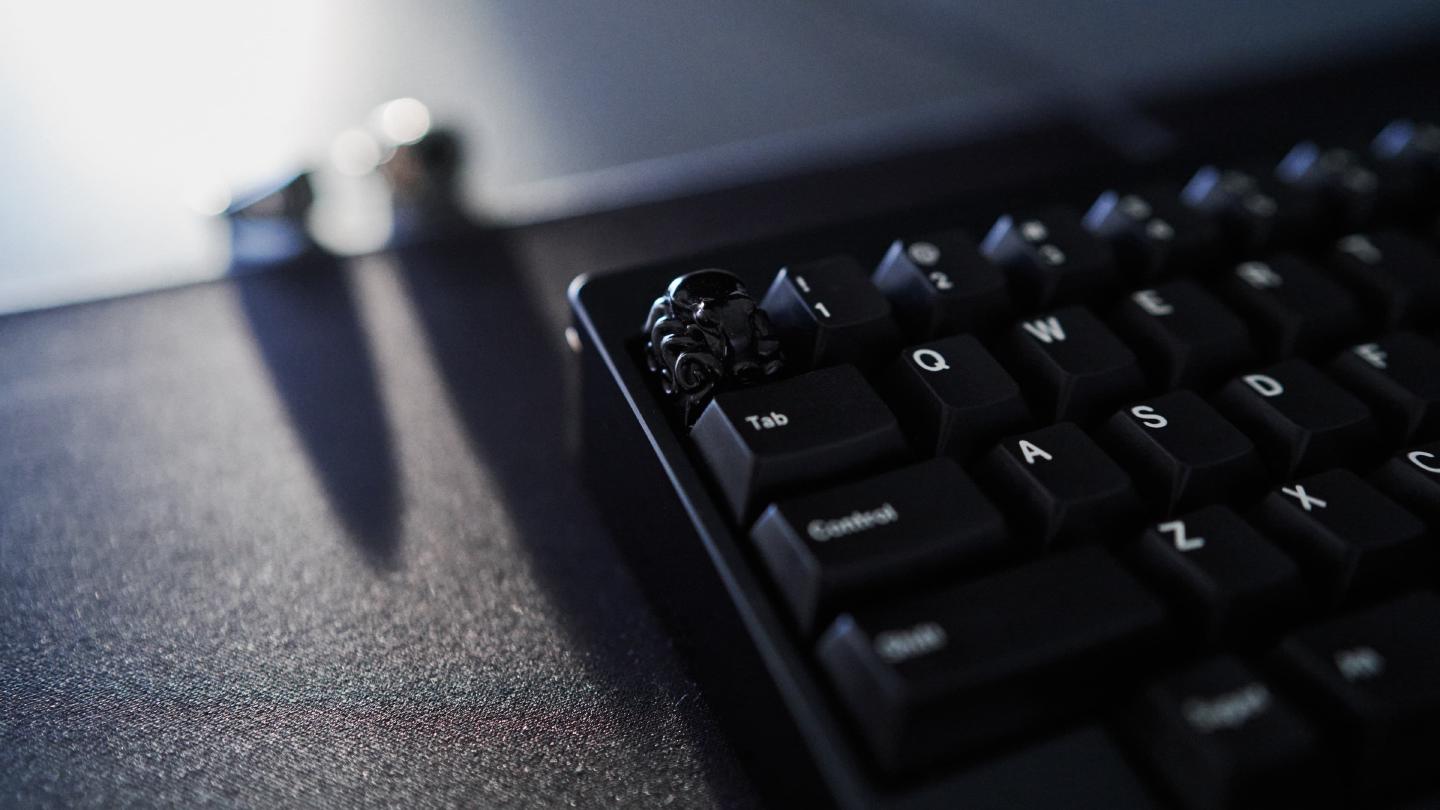 I’m a huge sucker for HHKB keyboards, because their layout is minimal, yet functional as well as aesthetically pleasing. The 60% form-factor for me is the perfect middle-ground for a compact and transportable keyboard that’s still comfortable to use for a wide variety of tasks. Also, if you’re in the r/mk game, the fewer amount of keys usually translates to cheaper key sets, although it tends to be harder to find sets that come with the 1.75u control key and a 7u space bar.

From a technical perspective, the HHKB layout is ideal for performing command line magic, dealing with vi shortcuts and obviously writing software. Especially on Linux there’s little to no need for a function key row or other dedicated special keys. Most sane Linux/Unix apps let you work without such keys.

For every application in which it’s possible, I use hjkl navigation – usually combined with the ctrl key – since the HHKB lacks of arrow keys. However, I do have actual arrow keys mapped to ;/[', just like the original Happy Hacking Keyboard has. In addition, I also have arrows mapped to aswd, in order to have them available on both, the left as well as the right hand, simply because there are still too many programs that require arrow keys.

“Because keyboards are accessories to PC makers, they focus on minimizing the manufacturing costs. But that’s incorrect. When America’s cowboys were in the middle of a trip and their horse died, they would leave the horse there. But even if they were in the middle of a desert, they would take their saddle with them. The horse was a consumable good, but the saddle was an interface that their bodies had gotten used to. In the same vein, PCs are consumable goods, while keyboards are important interfaces.”
– Eiiti Wada

My primary keyboard is the RAMA M60-A LNY20 Kuro. I built it with the internal silicone dampener, using Durock V2 screw-in stabilizers that I lubed with Super Lube 21030.

The switches that I use with the M60 right now are Frankenswitches made of ZealPC Zilent V2 bottoms, Cherry MX Hyperglide tops, Drop Halo Clear stems, and 80g Flashquark long two-stage springs. The switches were filmed with Durock films and lubed with Tribosys 3204.
I decided to give them a try on my main board and I’m very pleased by the feel and sound.

While I don’t like the Cherry profile too much, I got the GMK Noire set as a present and it (unfortunately) fits the M60 look a lot better than MT3. The M60-A was clearly designed to be used with Cherry keycaps. Unlike it’s successor, the M60-B, and the KARA, its plate is not “sunken in”, meaning that higher-profile keycaps look and feel incredibly tall on the M60-A. The MT3 aesthetics work a lot better on the KARA and the M60-B.

The M60 is my end-game keyboard, as it combines purism, simplicity and beautiful aesthetics with a very deep/heavy sound and feel. Even though it’s typical RAMA, meaning it is not the most sophisticated engineering, it completely suits my needs for a solid yet minimal HHKB keyboard that’s not too flimsy but neither a heavy tank.

I’m using the M60-A as my daily-driver on the Linux workstation.

The album shows photos of the RAMA M60-A LNY20 Kuro with the following key cap sets:

My secondary keyboard is the RAMA KARA Iced. Just like the M60-A, the KARA is a HHKB layout keyboard and I also built it with the internal dampener and Durock screw-in stabilizers, that I lubed with Super Lube 21030.

On the KARA I use JWK Harimau 67g. They sound pretty good on the dampened keyboard and give it a very premium feel, even though it’s only an ABS case.

I change the keycaps that I use on the KARA every now and then. At the moment I’m using Matt3o’s MT3 3277, because they fit the look very nicely. Before, I had biip’s Extended 2048 custom key cap set with glyph modifiers and Katakana alphas.

Even though I prefer the rougher PBT structure of the biip 2048, I don’t particularly like the off-white of the biip set.

Look at that subtle off-white coloring; the tasteful thickness of it… Oh my God, it even has a watermark.
– Patrick Bateman

I find KAT as well as MT3 perfect for typing and observed that my precision and speed with these two profiles are way above any other profile, including Cherry. After trying all sorts of different profiles, I found that the Cherry profile is my least preferred one and feels very awkward to type on. Additionally, the sound of the bigger MT3 keycaps is significantly thockier.

I have a silver 藤原とうふ店 (Fujiwara Tofu Store) decal on the back of the keyboard, simply because I liked how perfectly it fit the back plate. Obviously it only makes sense on a KBDfans Tofu60 or Tofu65 case, though, and I have it purely for the aesthetics.

The album shows photos of the RAMA KARA Iced with the following key cap sets:

My backup keyboard is a frankensteined Kbdfans DZ60 rev3 in a 60% plastic case with a soldered WK layout, programmed as a HHKB layout. It has a 2mm case foam, GMK screw-ins and a poly-carbonate plate.

The switches are kailh BOX Jades and the keycaps are the Kbdfans NP PBT Blank set.

I’m undecided whether sell this board or re-solder it to an actual HHKB layout. I would need to order the required plate as well as an HHKB case, since the one that I have it in won’t cover the corners. If I should find a used Sangeo60 or D60 HHKB I might give re-soldering a try - unless I haven’t got rid of it before.

The album shows photos of the Kbdfans DZ60 with the following key cap sets:

The Vinpok Taptek is another backup keyboard. I got it a few years ago when I was used to the Apple keyboard layout, since it has a nearly identical layout like the MacBook.

However, the switches it comes with are awful. They are mushy and feel like they were lubed with glue, even though they weren’t lubed at all. It’s a better typing experience than on the integrated butterfly keyboard though.

The following list is an inventory of all the keycaps I have available. While I stick to the MT3 White on Black (WoB) for my primary keyboard, I usually play around with different combinations on my secondary.

I got GMK Noire as present and use it on my end-game keyboard, the RAMA M60. It fits the piraty look very well and while I do not like GMK in general, the text-only modifier design fits the M60 a lot better than Kbdfans’ WoB kit, which I find a much value for the money.

I purchased GMK Hennessey solely for having a neutral GMK set to compare other sets to – hoping that unlike GMK WoB, the WS1 caps won’t look that bad when they start shining and they hopefully won’t bleach out the way WS2 seems to do.

Imho, GMK is highly overrated, highly overpriced and in addition the current situation they’ve willingly put themselves (and their customers) in is a mess.

Besides, I’m not a big fan of neither their ABS keys nor the Cherry profile in particular. Instead, I prefer a good PBT key cap with a noticeable texture and a nice KAT or MT3 profile. While colors and lettering on PBT can be hit-and-miss, when you do find a good quality set, it usually lasts a lot longer with little to none aesthetic degradation. Since I mostly go for black and white sets, I don’t care too much about color options on ABS vs PBT. Besides, I prefer text modifiers over icons and would rather use blank caps than have the badly designed (there, I said it) standard Cherry modifiers on my board.

In addition to complete sets I also have the following artisan key caps:

I’m not particularly keen in getting or collecting artisan key caps. Most of them I happened to get through vouchers or as presents, with the only exceptions being the RW WAVE SEQ2 and the Kolkrabba caps, which I was intentionally looking for in order to complete my pirate-ish looking M60.

While I’m quite positively surprised by the quality of the RAMA as well as the Archetype artisan keys, I’m also negatively surprised by how the Clear Gen.s Monitor Screen V2 keycap aged and I’m expecting a similar aging process from at least the Archetype keys. The Clear initially was bright white translucent but after nearly one year turned into a yellow piece of plastic, even though it was not exposed to direct UV light for most of the time. Since I got it basically for free I’m not super disappointed, though.

I have the following switches around and swap them on my secondary keyboard from time to time. On my primary keyboard I usually stick to the switch I like most for a long period of time.

Some of the switches are modded, filmed and/or lubed, usually in order to achieve a better smoothness and weight.

Because I’m getting this question every time I post a photo of the switch containers somewhere: The containers I use are from a brand called Gondol and they cost me $3.50 per container, which is significantly cheaper than e.g. the containers by Kinetic Labs ($6.49). They are of very good quality and they are watertight.

I have the following deskmats:

The Chenyi deskmats are good in regard of their print quality and materials. They do not have any distinct odor to them and are comfortable to use. However, the actual design is not well executed. The black outlines are skewed, have different thicknesses and all in all the whole motif looks badly drawn.

As for the Kolkrabba deskmats, I was surprised by how bad they turned out. The mats were marketed as being distinctively different from one another in their colors and tones. However, they’re not. Unlike shown on the groupbuy posts and all the vendor images, the Abyss variant does in fact not have a grey-ish color tone, but is as blue-ish tinted as the Kolorbeast. The tint is so far from grey that when I put it on my dark grey desk it in fact appears navy blue in color.

It’s a similar story with the Kolorbeast mat. The colors look oversaturated, so much so that it lowers the overall impression of the deskmat’s quality significantly.

In addition to that, both deskmats continue to have an intense smell to them. A manual wash did not help get rid of that, neither did multiple machine washes. It’s in fact so intense, that after having it on the table for a while and removing it, the area on the table has absorbed the heavy odor and continues to smell. To this day I can’t use the deskmats for extended periods of time.

I also have a custom-designed black deskmat from Ultimate Custom Mousepads. Similar to the Kolkrabba deskmats, this one also has a noticeable odor to it, which however is less intense than the Archetype ones.

Upon ordering a double-check by their graphics department was requested, who confirmed that the print is visible and looks good. However, the print turned out to be barely visible. At least the black color of the deskmat is a lot closer to an actual black than what Archetype did with their Kolkrabba deskmats.

Short story long, deskmats seem to be the worst product category in this whole keyboard hobby.

I have the following accessories (without consumables like lube or switch films):