A while ago I stumbled upon an interesting Frankenswitch dubbed the Soju Switch: A combination of an C³Equalz X TKC Kiwi bottom, a Boba U4 top and a Lumia stem. I was tempted to build it, but ideally with parts that are more readily available and maybe even cheaper. 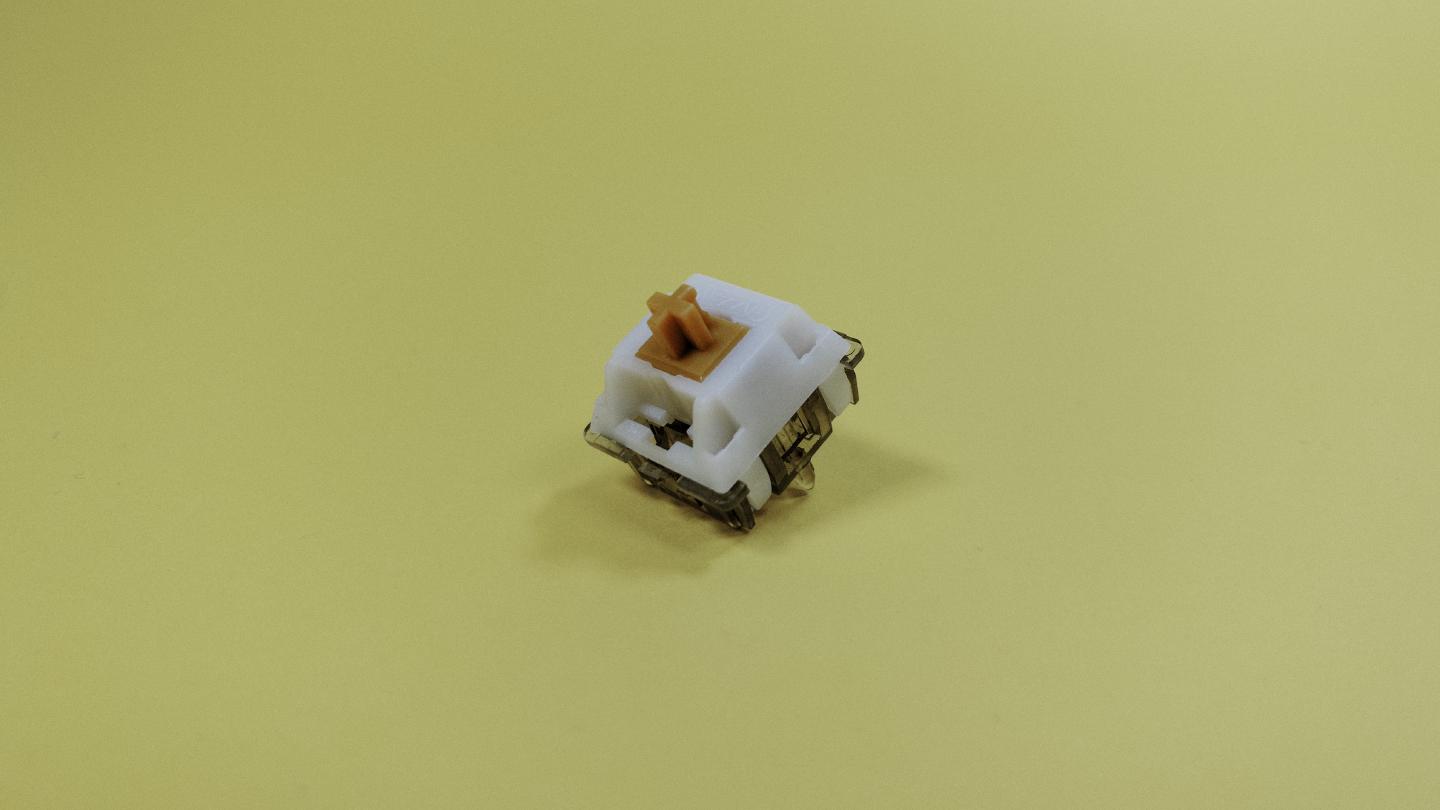 A while ago I saw a video from a YouTuber called Magniboards, in which he presented a switch dubbed the Soju Switch. It is a Frankenswitch built from an C³Equalz X TKC Kiwi bottom, a Boba U4 top and a Lumia stem. I was eager to try that combination, especially since he called it The New King of Tactile Frankenswitches. Unfortunately Kiwis are hard to come by these days and even if you find them in stock, they tend to be quite expensive at $0.65 per switch. The Durock T1 however has pretty much the same bottom as the Kiwi, but can be found as cheap as $0.55 per switch.

Similarly the Lumia switch seems to be increasingly hard to get – I even believe to have read somewhere that these switches were discontinued recently – and are usually more expensive at $0.60 per switch in comparison to Drop’s Halo Clears, that only cost $0.50 per switch. As for the Boba tops, those can easily be ordered directly from u/hbheroinbob as individual parts, meaning that you won’t have to purchase the whole switch in order to get the tops.

Alright, with all the required parts in place I set out to build the first switch. I used the Durock T1 gold plated springs for the first try, since I could still spring-swap the switches later on. After putting together the first four switches made out of T1 bottoms, Boba tops and Halo Clear stems, I noticed that the fifth didn’t work properly. The stem was not coming back up after being pressed down. I tried a different top but it kept hanging. I went back to the YouTuber’s video, since I remembered that even he mentioned the Halo Clears as an alternative to the Lumia stems. Indeed, he did. So why would some (as in roughly 30% of all that I built) switches not work properly?

After a few days of trying – even sanding down the tops – and investigating on r/switchmodders, it seems that I have found what’s causing the issue, thanks to u/darkbread:

Hey OP, when did you purchase those halo switches? I’m pretty sure Kailh updated the mold and now all Halo stems are manufactured slightly larger.

Case in point: all of the stems (literally every single one) from the switches I bought recently (12/2021) have tolerance issues with nixdork tops, but (most) of the stems from my Drop Holy Pandas (10/2020) fit very nicely.

It makes sense, considering that when I sanded down some of Boba tops I managed to make them fit. The difference in size seems miniscule, but it still seems to be enough for the stems to not fit the Boba tops, let alone the *nixdork ones.

However, u/darkbread pointed out something that’s even more interesting than the actual stem issue itself:

Also as a PSA: please do not follow the original Soju recipe unless you plan on soldering them in (and even then, the risk isn’t worth it imo). The recipe is very flawed and you WILL end up with bent contact leaves if you try to put them in a hotswap board. This is because Boba tops do not have the “clips” to hold the leaf in place. Try assembling one and you’ll see that one of the copper legs freely moves up and down.

I can confirm this is the case. It doesn’t seem to be a huge issue even on hotswaps, because it does take a fair amount of force to move the legs, but nevertheless u/darkbread is right that the Soju switch doesn’t look like great engineering in first place.

Since you probably thought to yourself “Why didn’t he link the video?” at the beginning of this post, by now you understood why I haven’t. The Soju switch unfortunately won’t work (anymore) when using Halo Clear stems, and even if it would, it wouldn’t be a good Frankenswitch from a technical perspective. I’ve nevertheless tried building it, but I’ve replaced the Halo Clear stems with regular Boba U4T stems. The resulting switch indeed sounds pretty good and slightly thockier than a stock Boba U4T. However, probably due to the leaf moving when inserting the switch, typing feels very inconsistent and odd.

Long story short, if you’re looking for a thockier version of the Boba U4T and you have Halo Clears lying around, you might just want to try and get the Boba U4T RGB tops. Interestingly enough, with those, you can use U4T bottoms and Halo Clear stems to build a pretty nice and thocky switch that won’t mess up your leaf and will work flawlessly. It seems like the RGB tops have high enough tolerances for the re-tooled Halo Clear stems to fit just fine.