An overview of all the computing devices I have and use for work and play, including technical details about the individual setups. 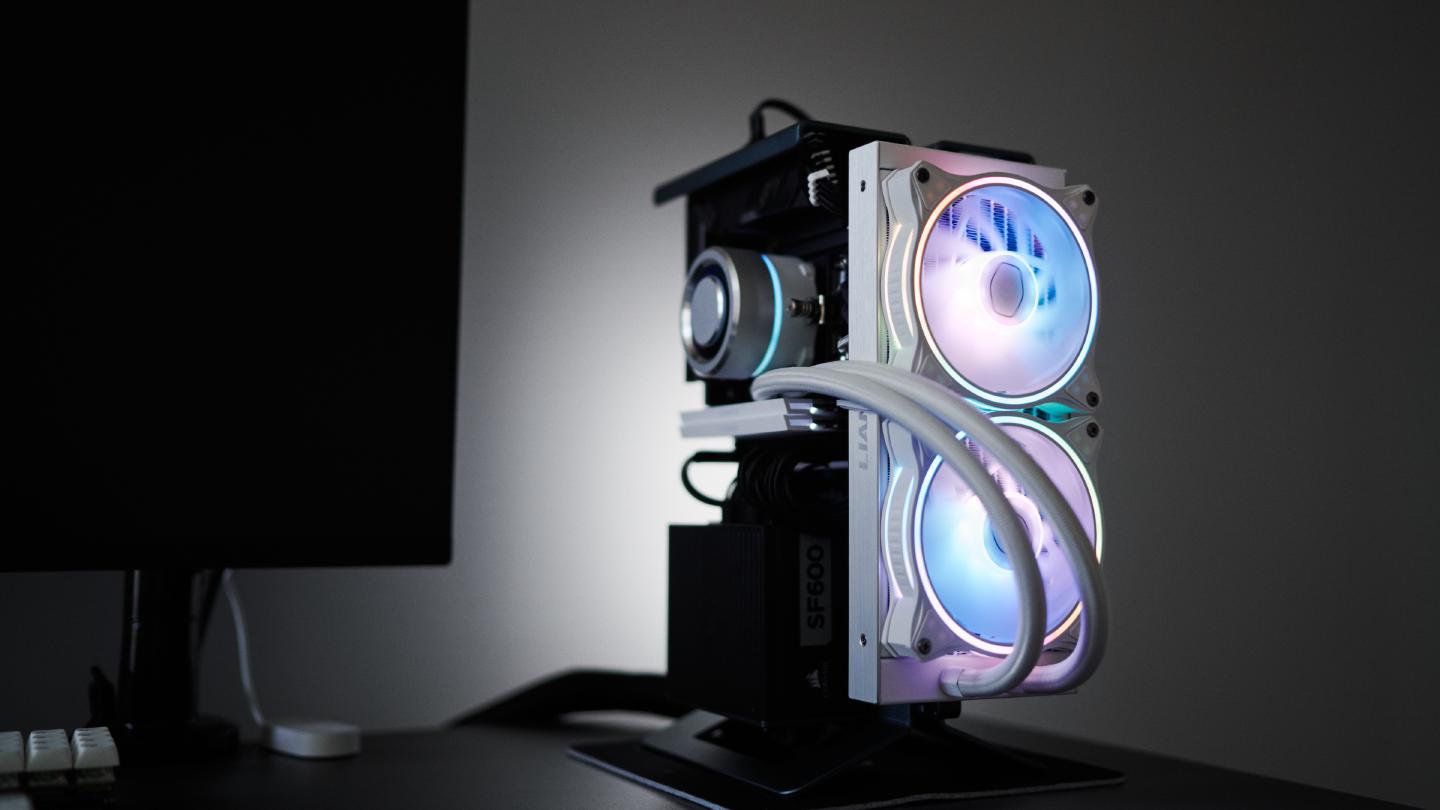 The hardware I use has to be powerful but portable enough to not be a millstone round my neck. While a lot of the heavy lifting that I’m doing happens in the cloud these days, there are still plenty of tasks that can’t easily be outsourced and where raw computing power makes a big difference in overall velocity. Hence I’m always looking for ways to improve my setup to allow me to be portable yet have enough processing power in order to be independent from stable internet connectivity or someone else’s computer (the cloud).

My main workstation is a custom PC build on a Xtia Xproto-N frame running Gentoo Linux.

The PC runs kernel >= 5.12.13 with encrypted ZFS in mirror-mode across two 1TB NVMe M.2 SSDs. The GUI uses Sway, a Wayland window manager that I use to render multiple instances of Alacritty and Firefox on a 4K display.

I use portage for managing most software that I have installed. If I need something that is not available through the official sources, I either check the overlays or git clone the repo and link its binary manually to /usr/local/bin.

I have a separate list with most of the command line tools that I used.

I don’t use many GUI applications. The main reason for me to use GUI tools is for creative work (like editing photos) and for that I use my MacBook.

Other than that I use the following programs under Linux:

The command line is my go-to environment for everything related to engineering and development. I used Sublime Text a lot in the past but I’m slowly making the switch to NeoVim. I don’t use Xcode, VS Code or any other IDE when I’m not forced to do so. On projects in which I did a lot of Qt I used their tool-chain in order to stay sane.

I use containers for many things, hence the Docker is quite an important tool. My local Docker engine is set up to run as a swarm, hence when I need to fire up containers locally, I use docker stack deploy for that.

My laptop is a 2018 15" MacBook Pro with 32GB DDR4 RAM, an Intel UHD 630 and an additional AMD Radeon Pro 560X 4GB on-board graphics card. It’s one of those MacBooks without a physical escape key.

For my eyes' health I use a matte anti-glare screen shield which unfortunately makes the already dim display a notch dimmer. Additionally I have black tape glued over my laptop’s camera for privacy reasons.

The MacBook runs the latest macOS release. Only recently I made the switch to macOS 11 Big Sur, after Apple removed their firewall and VPN circumvention hacks. Security, privacy and the overall dissatisfaction with Apple hardware in general – not taking in consideration the new ARM architecture, which is still far from ready for prime time – is what had pushed me to invest effort into switching from macOS back to Linux.

I use brew for managing most of the software that’s running on my MacBook.

On macOS I have a tmux session that’s constantly running inside a single instance/window of Alacritty. That’s due to Alacritty not really supporting multiple windows/tabs/panes on macOS.

The shell that I used even before macOS made it the default was and still is Zsh, with Oh My Zsh installed and my own carefully crafted .zshrc

I use to keep my .zshrc functional on both, Linux and macOS, so that I can easily sync my dotfiles between machines.

For the most parts I’m using the Mac when I need to do something that requires a graphical application like an image or video editing software. I’m looking forward to move these tasks to my Linux workstation as well, but so far it has been more easier to continue using them on macOS. I will continue doing so up until the point when the hardware might fail.

However, besides of the crude command line interface I use LaunchBar, because it lets me keep my hands on the keyboard while performing UI-related actions and tasks. LaunchBar brings a large set of functions and allows for easy extensibility. Other UI programs and little helpers that I use include:

I stay miles away from Adobe software and successfully got rid of the very last Adobe program I was using, which was Lightroom Classic. For the little creative work that I’m doing, I’m using the following programs:

I really don’t do much creative work, though. It’s more of a hobby. The reason I keep things like Pixelmator around is for the times when people send me PSDs or when I really do need to draw a few things on my own.

h4nk4 is an ultra-portable data center that offers a fully-encrypted network attached storage as well as KVM hosting. It runs on NixOS and has 5 GBit NICs.

The case is a custom designed, 3D printed enclosure that was built with portability in mind. h4nk4 has no HIDs nor a GPU – the Ryzen is not an APU – and is therefor configured to use a LUKS encryption key on a USB stick, that can simply be unplugged in order to make the device useless.

More info about what this device does, why and how I designed and built it can be found here.

This setup is more of an experiment of ultra-portability of the desktop, rather than a real alternative to a laptop or PC.

The experiment was partially successful, with the RockPi 4 performing a lot better than e.g. the Raspberry Pi 4B and hence offering a viable solution for an ultra-portable desktop. That said, the devices wasn’t able to use the full 4K resolution of the display, losing one advantage it would have had over most Linux-capable ultra-books.

More info about this setup can be found here.

r0n1n is a computer running OpenWRT (Linux) and bridging my internal network of devices with the outside world.

Unlike the majority of reviews online by people who struggled to properly set up and run the Linksys, I have experienced no issues with it whatsoever. That said, I’m only running the 5 GHz band for WiFi and all devices that have a NIC are using a wired connection.

This Raspberry Pi Zero W has a Pimoroni Keybow attached to it and runs the Kiwi firmware that allows it to connect to any 2.4 GHz WiFi and act as a wireless controller for all sorts of things.

I’m using this device to control everything that has an API (like IoT lights) as well as OBS Studio, which it can interface with since Kiwi 1.0.2.