With the global coffee consumption having surpassed the 10 Mill. Kilograms mark it is considered one of the most widely consumed beverages in the world, right after tea and water. With Starbucks and similar companies serving coffee even in the most remote areas, I believe that availability comes at the cost of quality and overall taste. This is why I stopped relying on served coffee and assembled my very own set of tools for brewing the type of coffee that I like, no matter the environment I’m currently in: A nomad’s coffee, no electricity required. 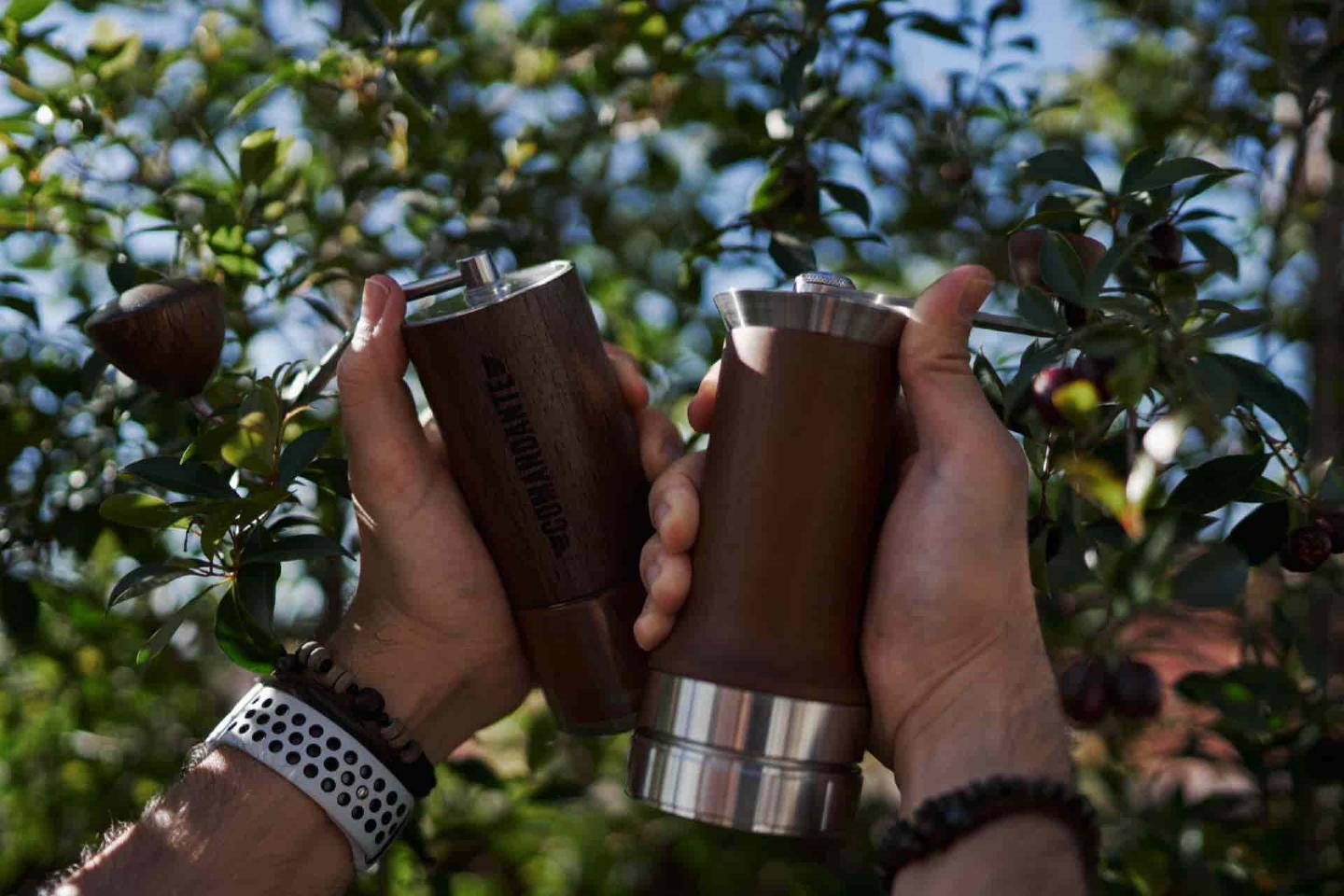 Over the past couple of years, coffee has grown to be a more than a quick caffeine fix in the morning. I started seeing coffee as less of a consumption good and began enjoying it more consciously, informing myself about its cultivation, the origin of the beans, the roast and of course the brewing processes. I’ve tried many different variants and tools, from pour-overs using paper filters as well as re-usable ones, over Moka pots and the famous Aeropress up to the supreme discipline of pulling shots on a portafilter machine.

While I enjoyed these different hand-brewing variants over extensive periods of time and dialled different knobs – like the bean origin and the roast – to vary the cups of coffee I was getting out of these preparation methods, at the end of the day I kept coming back for a good espresso from my Rancilio Silvia.

I loved the Silvia for being a very compact yet powerful espresso machine. Even though it had its shortcomings, like the lack of a pressure gauge or its unstable brewing temperature, I managed to get some very decent cups of coffee out of it. The Macap M2D I had standing next to it did a good job at grinding the freshly roasted espresso beans consistently enough so that the Silvia would not only work with the coffee grounds but also produce some very thick and stable crema along the way.

Unfortunately a full-size espresso machine is not exactly cabin luggage, so I had to give it away when I got rid of my apartment. Forced to find an alternative, I tested a few options and eventually ended up with what’s now part of my essential travel equipments list: The Aram Espresso Maker.

The Aram Espresso Maker (or Coffee Maker, how it was still called when I got mine) is a minimalistic and very high quality tool for extracting genuine espresso using a fully manual process. To do so, ground coffee and some boiling water is required.

Info: While I still own my Aram Espresso Maker and would still recommend it to others from a purely qualitative aspect, I have learned that when something should break - like it did with the gasket on mine - it will a lot of trouble to get replacement parts to fix it, especially during these times.

My Aram has been out of order since the beginning of 2021. There aren’t many parts that can break on this device, but if even a single of of them does you’re basically screwed and have to wait for Aram to have the part in stock as well as be able to receive it.

I’m not even mad about Aram not being able to offer a quicker way to get replacements, but what I’m mad about is the fact that especially at the price of ~$500 one could expect that they would at least add replacement parts for the parts that will experience the most wearing, like gaskets. These parts cost basically nothing in bulk and it would save customers in case they fail.

Update: It turns out that other gaskets have also deteriorated and broke. I’m yet on the hunt for replacement parts. Communication with Aram has become tedious, simply because it takes ages for them to get back and even when they do, misunderstandings seem to happen. I’ve tried finding the broken parts at hardware stores nearby, but haven’t had any success so far.

Update: It’s January 2022 and it has been almost a year since I had to put the Aram out of service due to broken gaskets. Communication with Aram is bad, like really bad. At some point they simply stopped responding. I was trying to order (and pay for) the replacement gaskets from them, but it seems like helping out their customers is not their top priority at all. Eventually I found an online hardware store that’s located somewhere in Europe, that had gaskets that are similar to the ones used by Aram. I gave it a shot, ordered them and was able to fix my Aram just recently.

The gaskets don’t fit 100% though. While the Aram works and the pressure seems fine, I’m still very disappointed by Aram support. It’s possible to fix the Espresso Maker using third party components, although it’s less than ideal, especially at the price at which Aram positioned their device. It feels like fixing a Ferrari by using scrapped components from an old Fiat - it’s certainly possible but definitely not the experience you’d expect.

The first thing you’ll need to get a good cup of espresso from the Aram is obviously a handful of good quality roasted beans of your liking and a good grinder. To make it clear upfront: The Aram won’t work with most pre-ground coffee (e.g. from supermarkets or maybe even from your local coffee shop) as it’s quite pretentious in terms of grind coarseness. You will definitely need a decent grinder that will allow you to fine-tune the grind level, otherwise you won’t be getting anything close to a good espresso out of it.

I use a Comandante C40 hand grinder. I tried cheaper hand grinders (like the Hario Mini Slim) with the Aram but couldn’t get a satisfiable result with those grinds. Even with the Comandante it took me a few cups until I got the flavour on point.

As for the amount, I would suggest going with approximately 19g. I used to use a scale for getting the right amount, but eventually I got the feeling for it and could spare an expensive scale. I found that as soon as I dialled the grinder to a good setting, small variations in the amount are totally okay and in fact produce very interesting taste profiles.

Preheating is key to success with the Aram. It’s a chunk of 304 stainless steel that absorbs an incredible amount of heat, hence it requires a few rounds of how water running through it before the actual brew can happen. I usually boil the water, pour it into the Aram (with its valve fully closed) and let it sit for two to three minutes, while I keep the rest of the hot water at a near-boiling temperature. Then I turn the crank to open the valve and let the water run back into the pot/boiler/kettle, where I make it boil just to pour it back into the Aram and let it stay for a bit again.

I repeat this two to three times, until I can feel that the Aram’s exterior got close to being uncomfortably warm. You could stick a thin thermometer through the holes on the top to measure how the water temperature changes, but, duh, nerd.

Hint: Don’t use tap water unless you know the mineral content of it. As I’ve detailed previously (search for TDS), not all water is the same, hence the resulting cup of coffee will taste differently depending on the water that you use. I usually prefer bottled water for which I can look up its mineral content, to make sure it is in the acceptable range for espresso.

As soon as I drained the chamber, I use a cloth to dry the bottom part and attach the filter containing the tampered coffee and connect the glass underneath. Then I pour the boiling water into it and turn the crank as quickly as possible until the screw thread reached its upper end. After that I quickly turn the crank the other way around until I can feel the pressure building up, which is when I start slowing down. At that point the espresso starts flowing and becomes brighter and brighter with every turn.

I usually stop the extraction as soon as I got the desired amount of coffee in the cup. This is done by spinning the crank back up until you hear a slurping sound, which is when the negative pressure kicks in, stopping the coffee from flowing. The glass can then be removed safely and the rest of the water inside the chamber can be drained afterwards.

In addition to the tools that I use and the actual espresso brewing process, I’m also beginning to maintain this list of some of the coffee beans that I’ve had so far. This list will grow over time and I will try to look up older roasts and add them as well.

These are all espresso roasts. The rating is my very personal rating for the individual roasts. Keep in mind that coffee is seasonal and hence not constant in availability nor flavour.